If you missed it, here is the introduction post.

So we start from here…

So I take Link to the Great Plateau and prepare to use the para glider….and fail. It reminds me of trying to fly a kite when you’re a kid – all excitement and anticipation, followed by disappointment as the pathetic combination of wood, string and material sold to you as a ‘kite’ crashes to the ground…I realise that I need something higher than the Great Plateau to jump off. My original logic was right, I need something high to jump off, but what? If only there was a obvious thing to….it’s that big blue tower thingy over there isn’t it?

Yup, right at the top of the tower and this looks like the best spot. The yellow mission marker is in front of me and I can see mountains and the skyline ahead. Having played Breath Of The Wild for a while now, I think it’s a great game and can see why it’s received all the plaudits it has. Graphically, it looks brilliant – for a machine that is supposedly underpowered, the Wii U does a fantastic job of running the game. You can see every details on blade of glass, random birds, the skylines…bar a little bit of slowdown, BOTW looks incredible. I find that, if you play the game on the Wii U Joypad, the slowdown isn’t an issue. Furthermore, BOTW handles brilliantly, the controls are intuitive and the response time is excellent. To heap more praise of BOTW, I really like the features Nintendo have added to BOTW – for instance, fast travel saved me from climbing up this huge tower again. Little features like that, the food preparation, the stats for weapons, clothes…I feel like Nintendo have looked at other games and taken great features from them. Skyrim is an obvious influence, as is Dark Souls (the big boss battles, like the stone monster who battered me a few months ago). Maybe that’s a big jump, comparing BOTW to a game I’ve never played (but will one day) but that’s the feeling I get.

“Mother, I’m flying!” Once you jump off the tower, you simply press X to begin gliding. Given that my previous experience of para gliding was Sonic 2 on the Master System, this is a welcome relief. I generally don’t enjoy flying/gliding in games so BOTW has surprised me with how easy it to to use the para glider. I drift downwards to the ground, towards the ruins and begin my trek to see Impa at Kakariko Village.

A shrine! I always feel like I’m making progress in BOTW when I find a shrine. Again, I can see the influence of more recent games on BOTW with the shrines – namely the Tomb Raider reboot from a few years ago. Maybe the shrines feature on other Zelda games, if so I’m sorry. As mentioned in the introduction, BOTW is really my first Zelda game. I managed to get one part of the Triforce on the original Zelda, but then got completely lost. Full credit to anyone who beat the original Zelda as a kid, I have absolutely no idea how you did it.

Into the shrine itself, the Bosh Kala Shrine…The subtitle of this shrine is ‘The Wind Guides You.’ The level is constructed of fans blowing giant streams of wind across a series of platforms. After fifteen minutes of trying to climb walls and shoot the fans, I realise that I need to use the para glider to drift across to the other side. I do like the puzzle solving element of BOTW, but I’m hopeless at it. I’m better at bashing enemies than solving puzzles, which is something I’m blaming my Sega upbringing for. Anyway, I grab the Spirit Orb and head out of the shrine.

No, because otherwise this game might be called ‘The Legend of Brigo: Breath Of The Wild.’ Brigo warns me about the Guardians and other monsters…I’ll be honest, I didn’t take too much of it in. Brigo is basically telling me bad things are happening, which I’ve figured out for myself. I figure it out again when I have a massive brawl with an enemy settlement, only for a nightmare sequence to occur and all the enemies to revive. They’re pissed too and it takes even more epic brawling to defeat them. So epic that I completely forget to take any screenshots. I guess it’s my own fault for thinking that enemies dwelling inside a giant skull would be an easy fight.

After staggering away from the never-ending fight, I see an enemy riding a horse. Given how much walking BOTW has involved so far, it’s a no brainer – I need that horse! I heroically jump the enemy from behind and club him to death. The horse just patiently waits for me to murder it’s rider, then allows me to mount him. As I gallop away, I decide that the horse needs a name – let’s call him Fred, it’s a trustworthy name. In typical Retro Redress style, I show how bad I am with vehicles straight away by almost running Fred off a cliff. After apologising to Fred, we take off to the Karariko Village map marker. 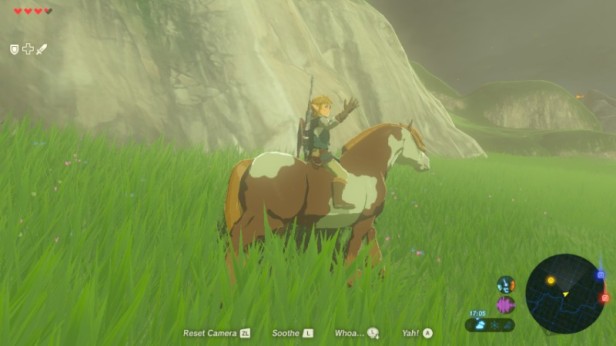 “You stupid horse!” To be fair, it’s my fault…Karariko Village is in the mountains and I’m trying to get Fred to run straight up a vertical slope. Worse still, the entrance to Karariko Village is just around the corner. I apologise to Fred again and stroll to the village. I’m awful at finding things in games, I honestly believe that maps and markers were invented for me, otherwise I’d never beat any game ever. I’ll be honest…I’m just bad at finding things. If there was a game where you had to find car keys to progress, I’d be on Level 1 for ever…

And so here we are…talking to Impa in Karariko Village…Impa explains more about Ganon and notes Link’s memory loss. Our next mission will be to try and recover Link’s memories it seems…I’m gonna jump on Fred and head on to the next mission in Part 2 of this redress…..

Will Link get his memories back?

Will the RSPCA rescue Fred?

Will Retro Redress admit that he’s bitten off more than he can chew trying to beat Breath Of The Wild in just over three weeks?